If you watched the program and want related material, we have Dr. Terry Mortenson’s DVD “Ape-Men: The Grand Illusion” that covers the same material discussed on the TBN Show. Just click the photo and links below to go to our store. 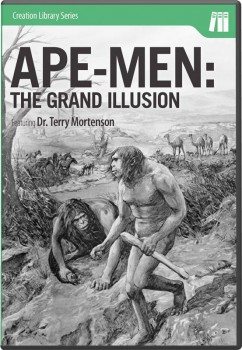 CLICK HERE to check out “Ape-Men: The Grand Illusion” DVD in the Creation Superstore

In this illustrated lecture presentation featuring Dr. Terry Mortenson, you will see that the “scientific evidence” does not stand up to scrutiny and that Christian leaders trying to fit ape-men into Genesis are seriously mistaken. The gospel importance of the supernatural creation of Adam and Eve is then made clear. See for yourself that the idea of ape-men is a grand illusion, deceiving millions and undermining both the clarity and authority of Scripture and the gospel message itself!

Buy “Ape-Men: The Grand Illusion” DVD from the Creation Superstore