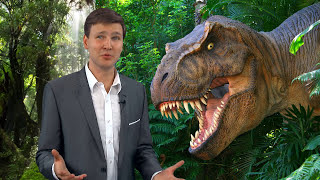 Can I be a Bible-believing Christian and believe in dinosaurs? You know, the kind of dinosaurs we see in the movies? Right, you know those scary ones that lived millions of years ago, killed everything in sight, and then inexplicably turned into birds after all dying in a meteor explosion?

Well, maybe not those… See, some of that is fiction… I’ve been on paleontological digs and I’ve dug up the bones of these monsters that you see in the movies. They were real. But there’s a few things that we hear about these creatures that are not based on fact. Let’s see if I can go over a few:

1. When I dig up the bones, I have never yet found a date stamped on one saying “deposited 65 million years B.C.” In fact, what’s getting a lot of attention within the scientific community these days is the discovery of soft tissue inside some of these bones. This soft tissue should not even last for 100 thousand years… much less the millions required for evolution.

2. While we know that dinosaurs really did eat other animals (because we sometimes find other creatures in their stomachs), it doesn’t mean they were ferocious. In fact, sperm whales and warthogs and other creatures have long sharp teeth that look remarkably similar to the T-rex, but they aren’t carnivorous killing machines. Okay, so you still probably wouldn’t have wanted a pair of velociraptors as pets, but trying to describe their behavior from a bunch of bones takes quite a bit of speculation.

3. You might have heard that the last dinos went extinct millions of years ago, but dating methods show huge discrepancies in the alleged ages of dinosaur remains. There’s something going on here. Recently, a dozen carefully collected and preserved samples of fossils and dinosaur remains were sent in for testing. Measurable amounts of Carbon 14 were found in EVERY ONE! The maximum limit for C14 is 80 to 100 thousand years! The current evolutionary theories need at least 50 million. Maybe it’s time for a reevaluation?

So, are dinosaurs real? Sure they’re real. They’re even found in the Bible! But dinosaur is a recent word, and until modern day, most people called dinosaurs, “dragons”. Dinosaur means terrible lizard, and while they certainly were very large lizards, we don’t know how terrible they actually were. But, they must have been a sight to behold! We often think of the term “dinosaur” as meaning prehistoric or ancient, but there are accounts all around the world of people fighting huge, terrible lizards and dragons. Think of medieval legends and Chinese symbolism. Maybe there’s more to the story than we’re being told in schools. Maybe the children’s stories and fairy-tales about these dinosaurs living 65 million years ago are just that – Fairy-tales.

The Bible says that land animals (that walked on all four), like dinosaurs, were created along with other animals during the creation week. That means that mankind would have seen these creatures!

In fact, again and again, new scientific discoveries are consistently confirming what was written in the Bible all along. I’m not surprised.