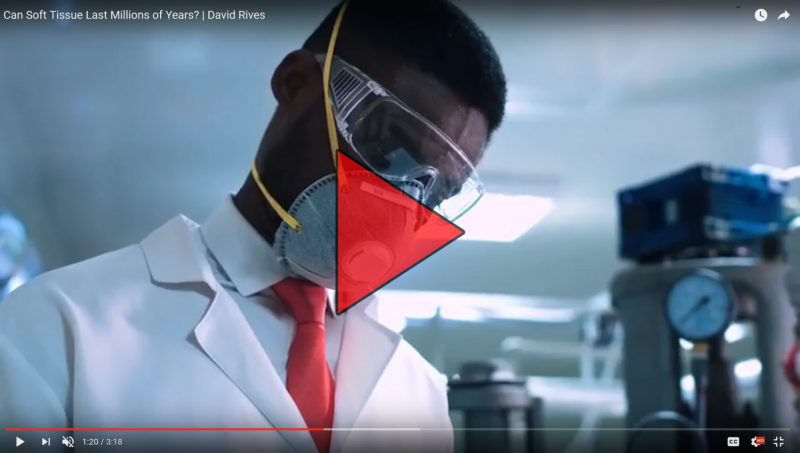 While the most famous discovery of dinosaur soft tissue didn’t come until 2005, scientists have been reporting the discovery of soft tissue and proteins in a wide variety of fossils since the 1970’s. They’ve found things like catfish fatty fins, unaltered amino acids preserved in amber, even what appears to be dinosaur DNA from a hadrosaur—but don’t worry, Jurassic Park isn’t here yet!—and even live bacteria! And then, in 2005, researchers discovered red blood cells, collagen fibers, and blood vessels in a T-Rex. Now, a Triceratops horn has been unearthed with stretchy material and even osteocytes! All of these examples of soft tissue are conventionally dated at tens to hundreds of millions of years old. And yet observational science tells us soft tissue can’t last that long!

Scavengers, microbes, and water destroy carcasses pretty quickly. But what if the organism is buried and sealed off from these potential destroyers? Can we maintain soft tissue then? Not really. You still have to fight with chemistry. Scientists have conducted reliable, repeatable experiments to figure out just how long soft tissues will last. And the results aren’t good for those who believe in millions of years.

Collagen is a tough protein and it holds up pretty well. Under the absolute ideal conditions, researchers have tried to accelerate the decay and extrapolate a best case scenario. Although they have only had a few years to run these tests, they are already running into big problems. They can’t adequately explain how these proteins could last for more than thousands of years. So how did it last for 65 million years in T-Rex and Triceratops bones?

And other proteins, which aren’t as tough as collagen can’t last NEARLY that long, yet researchers have described flexible proteins in tube worms dated at over half a billion years!
DNA fares even worse. It’s been estimated that perhaps it could last a few hundred thousand years, MAX, and yet secular researchers believe they have found DNA in a supposedly 65 million year old hadrosaur.

Research shows that soft tissue can’t last even ONE million years let alone tens to hundreds of millions. But this same research shows soft tissues CAN certainly last a few thousand years. That would be consistent with the Biblical dates for the global Flood described in Genesis! Breaking new evidence doesn’t confirm a secular timeline—it confirms a biblical timeline