If you watched the program and want related resource just click the photo and links below to go to our store. 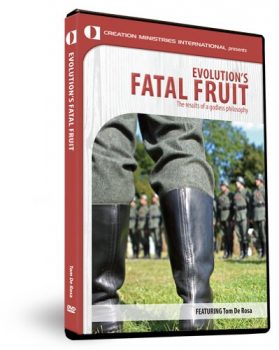 Evolution’s Fatal Fruit – The results of a godless philosophy

Darwin gave the world an explanation of life that helped to fuel the ovens at Auschwitz. Tom DeRosa shows the grim applications of evolutionary theory to human society applied by Hitler’s belief that he was helping the process along. These evolutionary ideas were also taken up by the American eugenics movement, which forcibly sterilized thousands. It’s shocking and it’s being advocated again today. You will never see evolution as ‘just a harmless theory’ again.