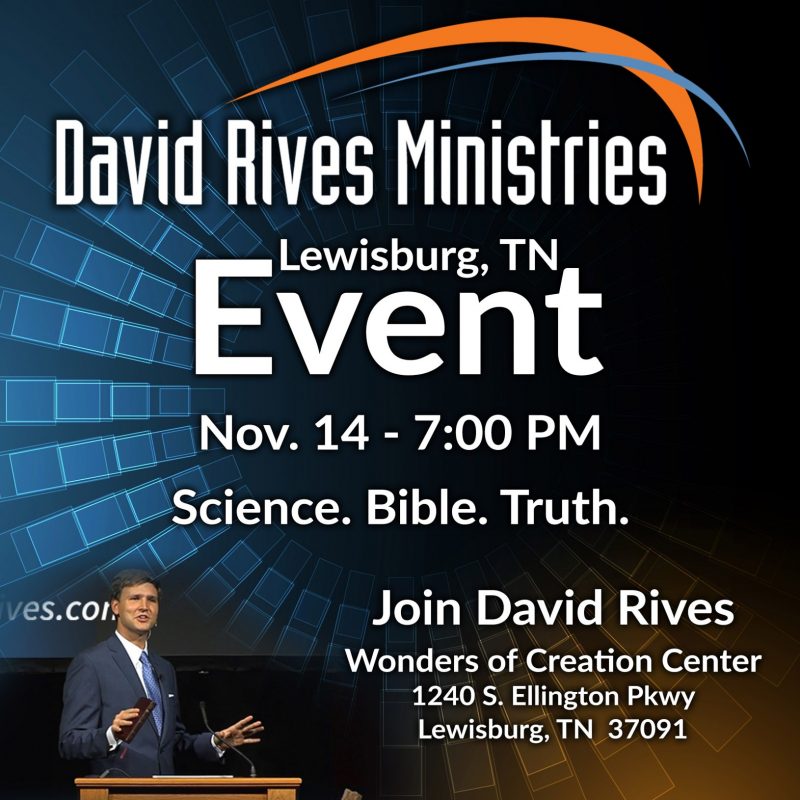 On Tuesday November 14th, David Rives will be giving his award-winning presentation titled: “Bible Knows Best – Hidden Gems of Astounding Science and Good Advice in the Scriptures” here at our new ministry center in Lewisburg, Tennessee.

Click below to watch a short promo video to learn more about this exiting event.

It’s November 14th at 7pm Central time. The presentation will conclude around 8pm but you are welcome to stay for a bit after and fellowship. If you can make it we would love to see you there! Feel free to bring friends… or if you can’t make it, invite someone you know.

David Rives takes audiences on an awe-inspiring journey. Discover nuggets of scientific truth that are easily found when we look closely at the words of Scripture. Did you know that the very origin of time, space, and matter can be found in the very first verse of the Bible? David expertly demonstrates the fact that the Bible is an accurate record of history from beginning to end, and is also extremely accurate when revealing scientific principles that have just recently been discovered by modern science.

What is DNA and what does it tell us about a Designer, God? What do the Earth, giant turtles, and a massive pool of water have in common? David answers this question and a whole lot more!

ALL ABOARD! You will learn the history of the man who charted the paths of the sea. Paths that are still used daily by ships all around the world.

Where would you go if you earned 156,000 frequent flyer miles, every year? Enter the fascinating world of Ornithology as you learn of the unexplained inherent knowledge and instinct of the Arctic Tern and the tiniest warm-blooded creature on Earth – the Hummingbird.

Did you know that there are an estimated ten sextillion stars in the observable universe? ….that’s a 10 with 21 zeros after it. Employing an easy to use technique, David gives the audience just a hint at the unfathomable grandeur of our Creator’s Universe, and His awesome creative power.