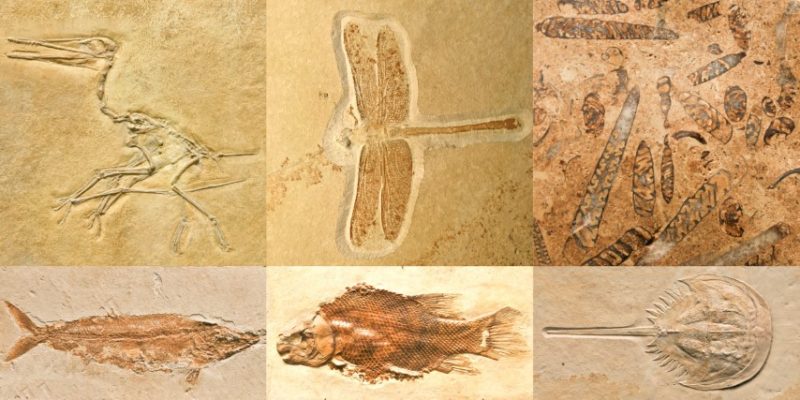 Two of the supposed evidences for evolution are rock layers and the fossil record. It’s said that it took millions of years to form the geologic column with all the billions of fossils it contains. If you search Google for “how are fossils formed” the top answer tells you that most fossils were formed when an animal or plant dies in a watery environment. The soft tissue decomposes and the bones are slowly buried by mud and silt. Over time, it says, sediment builds over the top and hardens into rock.

Now, this definition of how a fossil forms leaves out an important detail—the specimen must be buried deeply and rapidly for it to fossilize. Why don’t we see fossils being formed routinely today? Well, because when a creature dies, its remains decay away as scavengers do their work. It has to be buried very quickly or else there’s nothing left to fossilize. So is the slow and gradual process (described in Google search results) how most fossils formed in the past?

Well, let’s look at a few examples. In Australia there’s a rock formation that stretches about 300 miles. And it contains millions of jellyfish fossils. Now if you’ve ever been to the beach and seen a jellyfish that’s washed up on shore, you’ll notice they don’t last very long. Within a few hours they become just an unsightly blob. But these millions of jellyfish are well preserved. They had to be buried quickly. The evolutionist who discovered them said they had to have been formed in less than 24 hours! Wow!

Fossil fish have been found with their lunch half-eaten and sticking out of their mouths. An ichthyosaur was fossilized giving birth! And millions of clams have been found buried and fossilized in a closed position. When a claim dies, its muscles relax and it opens up. So these clams were alive when they were catastrophically buried. Obviously these creatures were all fossilized very quickly.

As we can see from these examples, the key is not long periods of time. The key is the right conditions. The Bible describes a time in history when the conditions were just right for burial and fossilization on a massive scale. Around four thousand years ago, God judged man’s wickedness with a global Flood. This catastrophic event would have ripped up miles of sediment, re-depositing it in layers. Billions of organisms, most of them marine creatures, would have gotten trapped and buried under all this sediment. These conditions would be perfect to form the fossils we find today.

It doesn’t take millions of years to form fossils. They don’t provide support for evolutionary ideas about long ages but, when interpreted through the lens of a Biblical worldview, rapid mineralization makes perfect sense.

Just one more scientific reason that you shouldn’t believe in geologic evolution. It takes a LOT of faith.