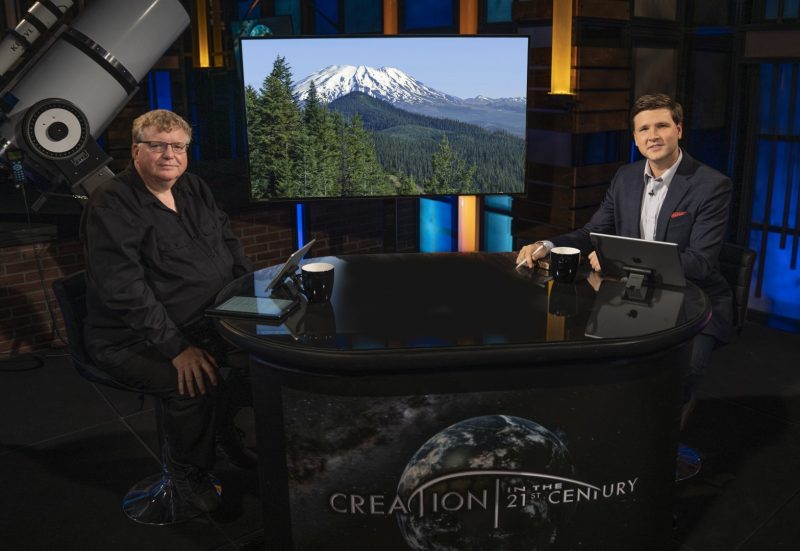 Tune in to TBN (Trinity Broadcasting Network) this Saturday, December 8th, at 1:30pm Central to see this week’s brand new episode of “Creation in the 21st Century.” Join David Rives as he welcomes Paul Taylor to the program. Watch this show to learn about the catastrophic effects of the Mount St. Helens eruptions that were not only local but also global. Learn more on this week’s episode of “Creation in the 21st Century.” If you watched the program and want related material, just click the photo and links below to go to our store.

In the early morning hours of May 18, 1980, the pristine scenery around Washington’s Mount St. Helens was shattered by a powerful explosion that devastated its north slope. The eruption of a landmark mountain had begun. In the aftermath, amid the rivers of mud, blankets of ash, and eerie quiet, scientists made a startling discovery: “nature” was bringing life out of death, re-claiming from the destruction a teeming colony of plant and animal life. Most amazing of all, the geological upheavals had re-created the processes of old that had carved out such marvels as the Grand Canyon. Today, the site stands as a testament to the power of God, who upholds all of creation. Buy this book from the Creation Superstore

CLICK HERE to check out “Mount St. Helens” DVD in the Creation Superstore

In 1980 Mount St. Helens erupted and quickly became known as “God’s gift to Creationists”.  Thirty years later geologist Dr. Steve Austin returns to the volcanic monument to share about the catastrophic processes which reshaped the terrain and how they support the Biblical record of earth’s history.  He presents his research on how the events at Mount St. Helens reveal catastrophic processes in other geologic features such as the Grand Canyon and the petrified forests at Yellowstone.  The formation of these features have been thought to have taken millions of years, but because of the events at Mount St. Helens, can now be explained by catastrophic processes, especially the Global Flood as recorded in the Bible. Buy this DVD from the Creation Superstore

TUNE IN EACH WEEK TO WATCH:

Visit the CREATION SUPERSTORE to browse through DVDs and Books relating to the show’s topics.

David Rives is the host of Creation in the 21st Century. Visit his ministry website HERE.
To find related products, including DVDs, Books, and more, visit the CREATION SUPERSTORE here...

The Galapagos Islands – A Different View with David Rives and Dr. Georgia Purdom on TBN

Lessons from Insects with David Rives and Frank