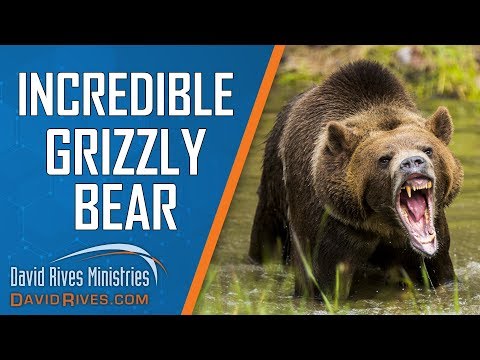 When your scientific name is Ursus arctos horribillis, you know you have a reputation for something! That’s the scientific name for the American brown bear, better known as a grizzly. And I’m here with my new friend, Mark Dumas where I get the opportunity to look at grizzlies up close and personal!

Now, grizzlies can reach up to 800 pounds and they can stand up to seven feet tall, but many are smaller than that. They have a reputation as brutal killers—and since they have claws as long as my fingers, I don’t suggest going anywhere near one in the wild!

Now, they’ll generally leave you alone if you leave THEM alone. But if you don’t leave them alone…well I don’t suggest that! They have unpredictable temperaments and can quickly become angry and charge. These guys might look big and clumsy, but they can run up to 35 miles per hour…and sustain speeds close to that for TWO miles! So in bear versus human, the bear will probably come out the winner!

Now, that being said, you may be surprised to learn that a bear that size eats mostly insects and vegetation. One of their favorite foods is actually moths and they’ll forage for hours and devour tens of thousands of them. They also eat roots, berries, insects, carrion, fish, moose, mice, rabbits—even other bears! They’re very opportunistic and will eat pretty much anything.

And that’s a good thing because during the late summer and fall they have to gain three pounds a day! That fat will sustain them through their long hibernation. Even a pregnant female has to live, grow her babies, and then nurse them off of whatever fat she can store. So they have to EAT UP when the getting’s good.

It’s interesting that even today, Grizzly bears live off large amounts of berries, roots, and plants, and while they certainly do eat meat today, that wasn’t in their original diet. Because of our sin, death entered into the world, including animal death. The Bible says that all of creation groans. But as Christians, we are promised a new heavens and new earth where there will no longer be any death, disease and suffering. There are a lot of lessons to be learned from the mighty grizzly bear.