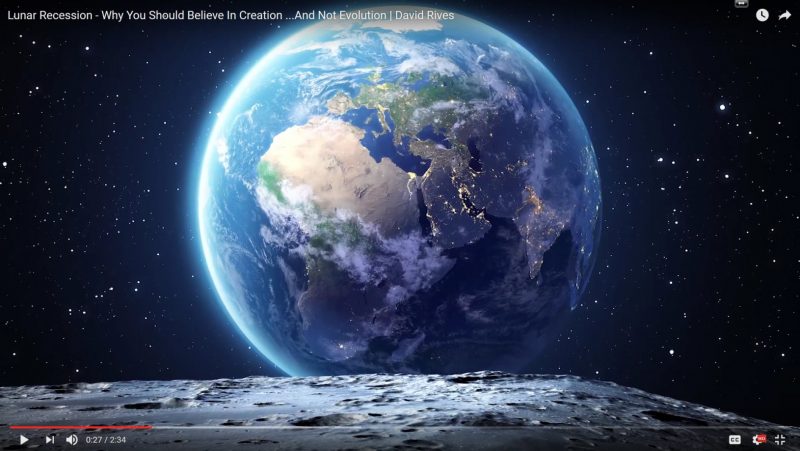 The next time you stand outside at night and look up at the Moon, think about this: that moon is a tiny bit farther away from you than it was last time you saw it. Every year the moon drifts away from the Earth about two and half inches. Now, that’s not much if we live in a young Universe like the Bible describes. But, you see, if we believe in a Universe that is billions of years old, two and a half inches a year adds up pretty quickly.

The movement of the moon away from earth is called lunar “recession.” The gravitational pull of the moon that causes our oceanic tides is the force behind this slow spiral recession. Now, if the Moon was much closer in the past these tidal bulges would’ve been bigger – and that would’ve made the moon recede at a greater speed. This makes for a big problem in an old Universe.

Here’s the problem: at around 11,500 miles from Earth there’s what’s known as the Roche Limit. This is the absolute closest the Moon could ever get to Earth. Any closer and the Earth’s tidal forces, which are caused by the Moon, would shatter the Moon. But, if you try to calculate the curve of the recession, then less than 1.5 billion years ago the moon would’ve been touching Earth! So why didn’t it shatter or why hasn’t it spiraled away from us?

The recession of the Moon is a difficult problem if we accept the idea of billions of years. But it’s not a problem if you start with God’s Word. If the Moon was created on Day Four of Creation Week, about 6,000 years ago, it’s receded far less than a kilometer. That’s not very much!

Just one more scientific reason that you shouldn’t believe in evolutionary cosmology. It takes a LOT of faith.