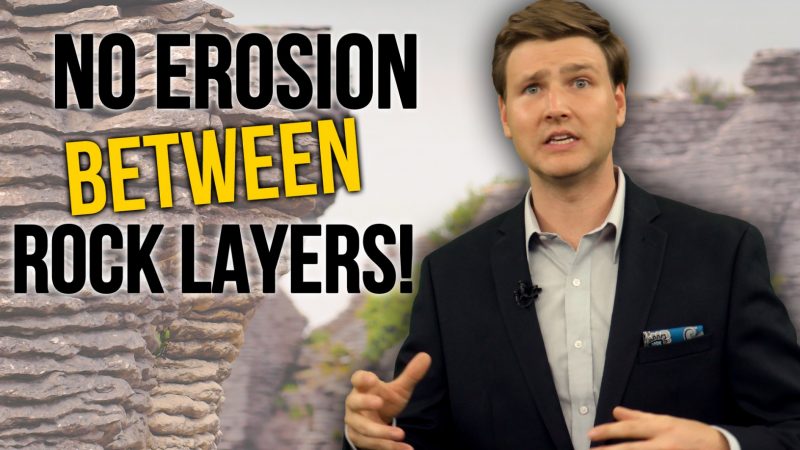 You’ve probably heard the conventional story of how the rock layers formed. The most popular story is that rock layers form slowly over millions of years by the same geologic processes we see operating today. Weathering and erosion then produced hills, valleys, and the other topographical features we see today. But a quick trip into Grand Canyon, perhaps the most spectacular place to view rock layers, shows this narrative can’t be right.

If this old-age view is indeed a correct interpretation of the evidence, we’d expect to see weathering and erosion between rock layers. After all, if those rock layers are being deposited and exposed to the elements for hundreds of thousands or millions of years, you’d expect there to be evidence of it.

But we don’t find this evidence. What we see instead is rapid or no erosion between layers. Between various sediment layers in Grand Canyon the boundaries are clean and flat. There aren’t gullies, hills, and valleys that were slowly filled by the next layer of sediment. There’s just a flat, featureless rock layer with another flat and featureless rock layer on top of that.

For example, the boundary between the Coconino Sandstone and the Hermit Formation is completely flat and featureless from one side of Grand Canyon to the other. How did the soft Coconino Sandstone manage to resist erosion for vast eons of time?

The logical answer is that it didn’t. The long-ages view of the rock layers simply fails to explain the evidence. But there’s a model that does explain why we see very little erosion between layers. In the book of Genesis we read about a violent global Flood that destroyed the world that then was. The raging floodwaters would’ve ripped up miles of sediment and redeposited it in layers. These layers were laid down minutes, hours, or, at most, days apart from one another. There was no time for slow and gradual erosion to wear down the layers!

The Biblical historical accounts explain what we see in the world – but the man-made theories of geologic evolution do not.