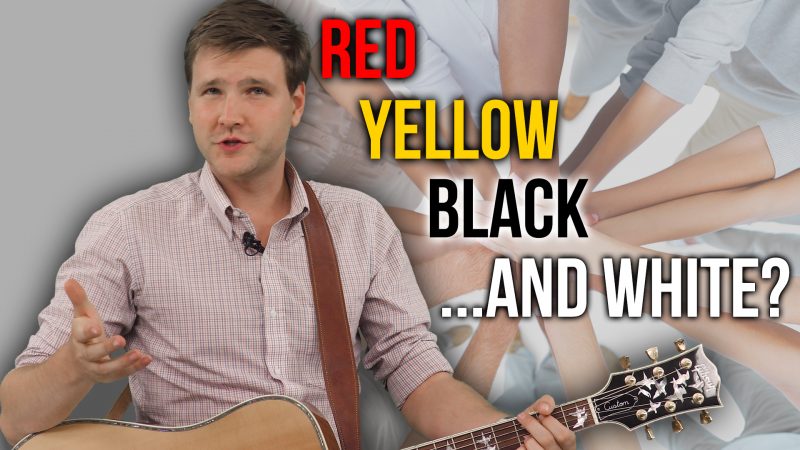 Now this song teaches an important truth: Our Savior loves everyone. But what about that middle part? “Red and yellow, black and white?” Did you know that there’s actually no such thing as a black, white, red or yellow, person? You can test this yourself. If you have a skin shade that’s light, like mine, hold a piece of white paper up to your face. All of the sudden, I look light brown! Or if you have a darker shade of skin, hold a piece of black paper to your face. Chances are, your skin is not technically “black”?

All humans are actually different shades of brown because of a pigment called melanin. I only have a little melanin so my skin is lighter brown. Others have a little more pigment so their skin is middle brown. Still others have a lot of melanin so their skin looks dark brown. While there’s a wide variety in shade, there’s only one basic color—brown! In fact, when you spend a lot of time in the sun, your body begins to produce more melanin to guard your skin against the sun. That’s the reason you get a darker tan when you are outdoors a lot.

Now, some throw around the word “race” to describe the differences we see in people. But there’s actually only one race, the human race. This is a concept that comes directly out of the Bible. We’re all descended from the first man, Adam, and the mother of all living, Eve. Because of this, we’re all one race, or “one blood” as Paul puts it in his sermon in Acts. This Biblical teaching was confirmed when scientists mapped the human genome around the year 2000. They confirmed that genetically we’re all one race.

All of this makes perfect sense, and points back to the robust genetic code that God instilled in each one of us. We’re wonderfully made! But, because we’re all descendants of sinful Adam and Eve, that’s why we all need the salvation that Jesus Christ has offered.