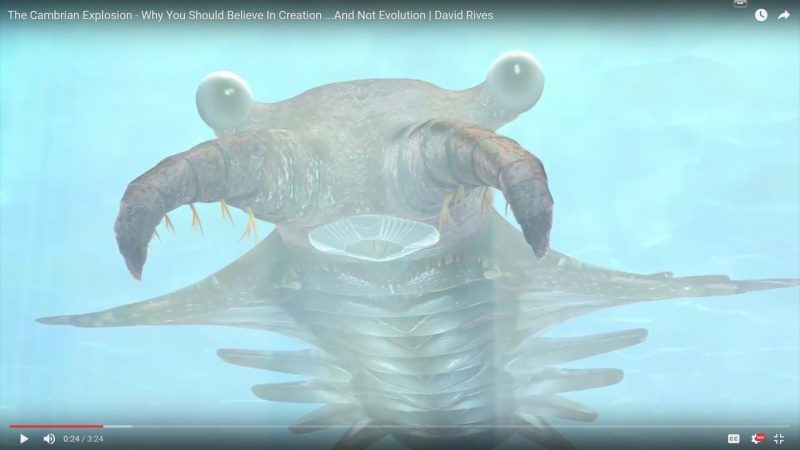 Near the bottom of the fossil record is a layer of rock known as the “Cambrian.” This layer is bursting with fossils of all kinds of creatures, many of which look very bizarre to us today. Now, at the time of Charles Darwin, one hundred and fifty years ago, no fossils were known to exist below the Cambrian layer. The Cambrian fossils seemed to explode from nowhere. Darwin recognized that this “Cambrian explosion” was a huge challenge to his position. Well, after over a century and a half of research, the Cambrian explosion is an even bigger mystery to evolutionary researchers.

You see, more and more fossils have been found throughout the Cambrian. We now know that every major group of organisms—including vertebrates—existed at the time these layers were deposited. This means every major body plan existed before the Cambrian! And these creatures are amazingly different from one another and many, like trilobites, are highly complex. Where did all these creatures come from?

What can explain the Cambrian fossils? The global Flood of Noah’s day described in the Bible! God created all creatures fully formed and functioning so we wouldn’t expect to find ancestors to the Cambrian creatures in the rocks below. As the floodwaters rose they would’ve ripped up miles of sediment, re-depositing it in layers, trapping and burying billions of creatures. The seemingly bizarre creatures of the Cambrian were perfectly designed for their marine environment—an environment that was destroyed by the Flood. And some of those creatures did subsequently go extinct. That’s no surprise!

Evolutionary ideas can’t explain the Cambrian but the history recorded in God’s Word certainly can.