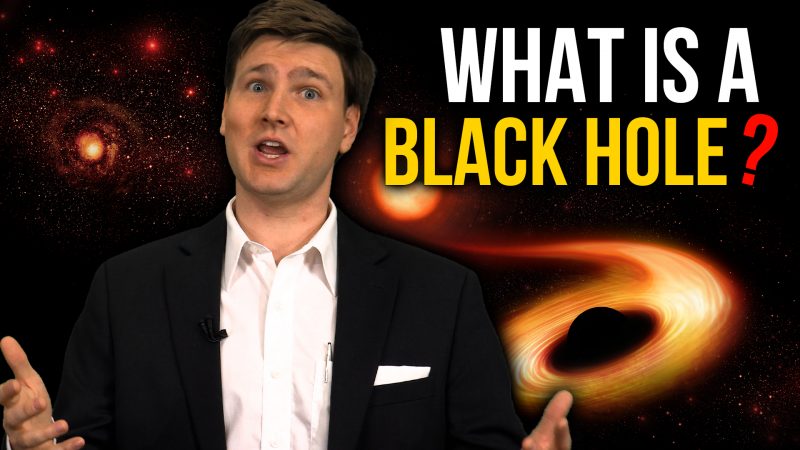 How do you detect something out in space that’s invisible? Well, you observe how the objects near it behave. This gives you clues about the nature of the invisible body. And that’s exactly how scientists have discovered and described black holes.

Black holes are not visible through standard technology or telescopes, even though they’ve been discovered throughout our own galaxy and our universe. They have an extremely high density, which means there’s a lot of mass in a small area called a “singularity.” Black holes have such a strong gravitational attraction that nothing—not even light—can escape. However, we can see the effect these giant objects produce on nearby matter and stars.

Now, it’s a common misconception that light gets “sucked” into a black hole. But a black hole is nothing like a vacuum, so it doesn’t “suck.”

A friend of mine, Dr. Jason Lisle, has a PhD in astrophysics from the University of Boulder. He had a helpful analogy for understanding how light falls into a black hole. Imagine a lake with a drain in the center. You pull the plug and the lake starts to drain. The drain represents the “singularity”. The water or objects far away from the drain are hardly effected. But imagine there’s a boat on the lake and it’s going at a constant speed—the speed of light—away from the drain. But the water—or space-time—is flowing toward the drain at the same speed. So, the boat, (or light), doesn’t go anywhere.

So, what makes a black hole? Well, that depends on the type of black hole! Stellar black holes are formed when stars collapse. But the star must be three times the mass of our sun in order to have the potential to turn into a black hole…thankfully! Other black holes, such as supermassive black holes, were probably directly created by God. Naturalistic scientists have tried unsuccessfully to explain their origin, but some evidence suggests that God created them from the beginning.

Our galaxy, the Milky Way, is thought to have a supermassive black hole at the center. But this is a problem in an evolutionary view. This black hole is orbited by many massive, bright young stars. In a naturalistic worldview, stars are thought to form from clouds of gas and dust that collapse under their own weak gravity. But a black hole would disperse any dust clouds before anything like that could happen. And, making the problem even worse, these massive stars burn through fuel extremely quickly. They can only last a few million years, max, so there isn’t time for them to be formed somewhere else and then migrate to their current position near this black hole.

Our own supermassive black hole, and the beautiful, bright stars that orbit it, were all created by God on Day 4 of Creation Week when God “made the stars.” Black holes should encourage us to glorify God for all the amazing physics He’s put in place.