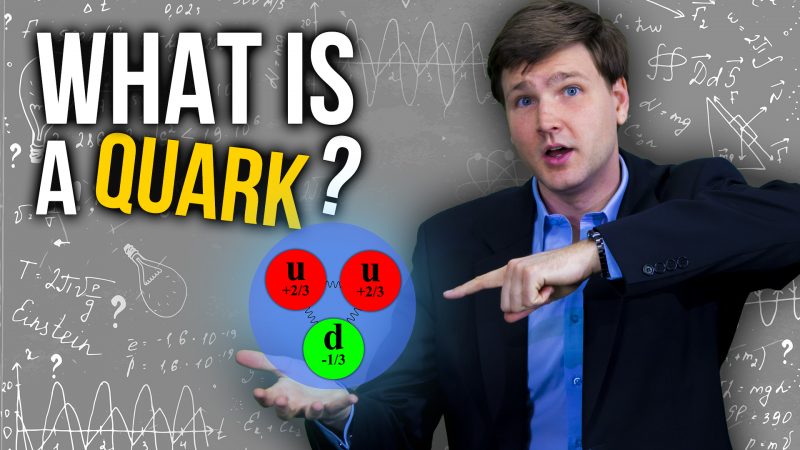 To discover what a quark is, you’ve got to think small. Really, really small. So everything in the universe is made up of atoms. Your body, your dinner, your driveway, all the stars in the night sky—they’re all made of atoms. And atoms are made of three tiny subatomic particles; protons, neutrons, and electrons. We’re only concerned with protons and neutrons here because a physicist in 1964 theorized that these subatomic particles are made up of something even smaller—quarks. He named them after a whimsical line in a famous James Joyce work that goes: “Three Quarks for Muster Mark!” (Props to you if you can name the book)

Quarks never occur alone. You’ll always find them hanging out in groups, just like in the cool kid’s corner in school. Composite particles made of quarks are called hadrons. And, then, there are different classes of hadrons as well.

Now there are six different flavors, or kinds, of quarks. The two lightest quarks are called up and down quarks. Up quarks have a two-thirds positive charge and down quarks have a one-third negative charge. That’s right—they have a fractional electrical charge! They also have different masses and different spins. The charge of the quarks equals the charge of the particle. For example, a proton is composed of two up quarks and one down quark and has a charge of plus one.

But wait, there’s more: After up and down quarks, they discovered strange, charmed, top, and bottom quarks. Up, charmed, and top quarks all have a positive charge of two-thirds. Down, strange, and bottom quarks all have a negative charge of one-third. And, just to make things even more confusing, each quark has a corresponding antiquark! These antiquarks have a mass identical to their corresponding quark, but the opposite charge.

Here’s where it gets super deep, because there’s a lesson to be learned here: Even though we now have the technology to image individual atoms, quarks and other subatomic particles are still studied through complex particle accelerators and the effects produced from experiments are what let us know the quarks are there. In other words, we can’t “see” them with our eyes. We could go our whole lives without acknowledging their existence, but it wouldn’t change the fact that they are there. Their presence is known only when a physicist “seeks to find them”.

In the same way, someone can go their entire life without acknowledging the existence of a Creator. But that doesn’t change the fact that He’s there. Yahweh, the God of the Bible also left us a historical record of the creation of the Universe. You don’t have to dig very far to find the truth.

Seek and ye shall find. Ask and it shall be given unto you.