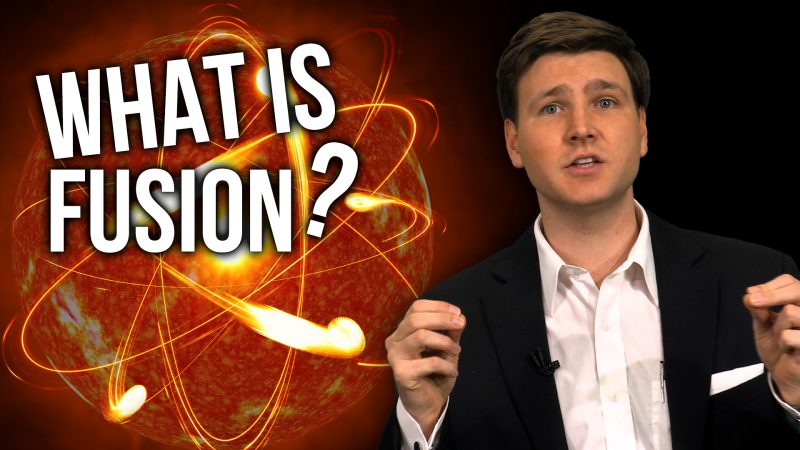 Every day, you enjoy the effects of nuclear fusion, probably without even realizing it. What is nuclear fusion? Well, before I explain that, let’s take a quick refresher course in atomic theory. Everything in the universe is made up of atoms. Inside atoms there’s a nucleus, positively-charged protons, and negatively-charged electrons.

Amazingly, it’s the fusion of these smaller-than-microscopic atoms that powers our sun and provides both heat and light to earth. Here’s how it works:

This process involves several steps. First, two protons fuse to form a deuterium, among other things. Then a proton and a deuterium fuse and form helium-3. Then two helium-3 atoms form helium-4. This process releases a tremendous amount of energy. That energy is released in the form of electromagnetic radiation, and is important for us, because it provides light, and heat to Earth.

Our sun fuses, on average, about 716 million tons of hydrogen each second!

You need a tremendous amount of heat and pressure for nuclear fusion to occur. Stars, including our sun, have both. The amount of pressure in a star heats it up to sufficient temperatures for this process to unfold. And this process is so powerful we can feel the heat of the sun from 93 million miles away and can see stars that are many, many light years away.

What about nuclear fission? Well, fusion and fission are different, and FISSION can produce some pretty deadly effects here on earth when utilized in certain ways! Yep, that kind of way! Nuclear fusion is the process we’ve covered today. Fission is the opposite process as things break down and you “split the atom”.

Stars can’t continue nuclear fusion forever. Eventually they’ll run out of energy. But, that day won’t come for at least 4 billion years for OUR Sun. LONG before that day comes, those who have trusted in Christ will be dwelling with Him in the new heavens and new earth. Oh, and it’s interesting that the Bible tells us there will no longer be any need for the Sun, because God himself will be the light. That light won’t be created by nuclear fusion—it will be from the glory of God himself.