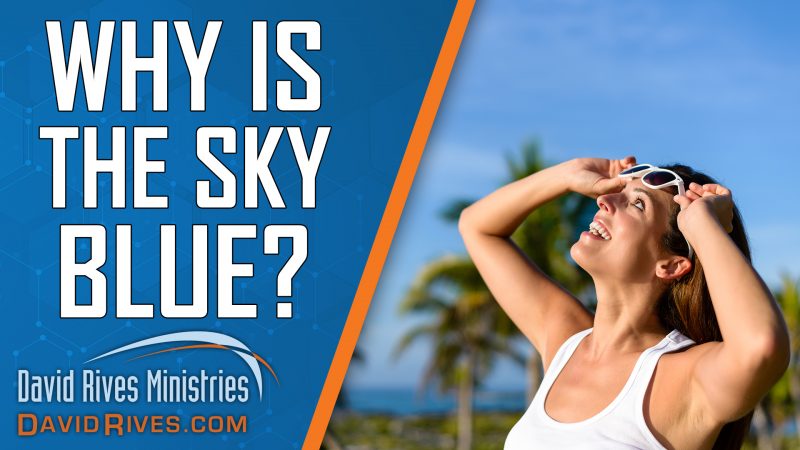 Have you ever looked up at an almost cloudless blue sky and wondered at the expanse above you? The air around us is transparent—so invisible it’s easy to forget it’s even there—but somehow in the sunshine it turns blue. What’s going on? And, why blue? Physics gives us some fascinating answers! If we were standing on the moon with no atmosphere, the sun would be beating down on us while the heavens would still be dark as night. But even though the nitrogen, oxygen, and other elements of Earth’s air are invisible, they do have substance, which causes the light to scatter in different directions, some colors more than others. Red light has the longest waves of the visible spectrum and pushes through the atmosphere the best. This is why red is the last color you see fading from a beautiful sunset. But, blue has the shortest waves. It gets easily scattered around, bouncing off air molecules and causing the sky to glow—even from above. Pretty cool, right? So, physics tells us what is happening— But there are questions science alone can’t answer. Why blue? If we believe that the firmament is the Lord’s handiwork (that’s what King David said in Psalms), then lets explore what our Creator may have been thinking! Blue is one of the rarest colors in the natural world. Most things on earth’s surface are shades of brown and green, but more people claim blue as their favorite color than any other color in the spectrum! Even many who are colorblind can see shades of blues. There‘s something refreshing about looking heavenward and seeing a different color scheme from the world at our feet. In the book of Exodus, God had the Israelites use blue as one of the colors for His tabernacle. There’s one last thing that we can only experience because God chose to give us a blue sky: Next time you stare up on a clear day, pay attention to the tiny white flashes that sometimes float across your vision. Those specks are actually caused by single white blood cells passing through capillaries in your retina. Red blood cells absorb blue light and your brain compensates for their shadows automatically, but the blue light shines through the white cells allowing us to actually see hints of our body’s vital cells without needing any special equipment. We have reminders of God’s Creation everywhere we look. Now, go out and find yourself a blue sky! I’m David Rives, Truly, the Heavens Declare the Glory of God.