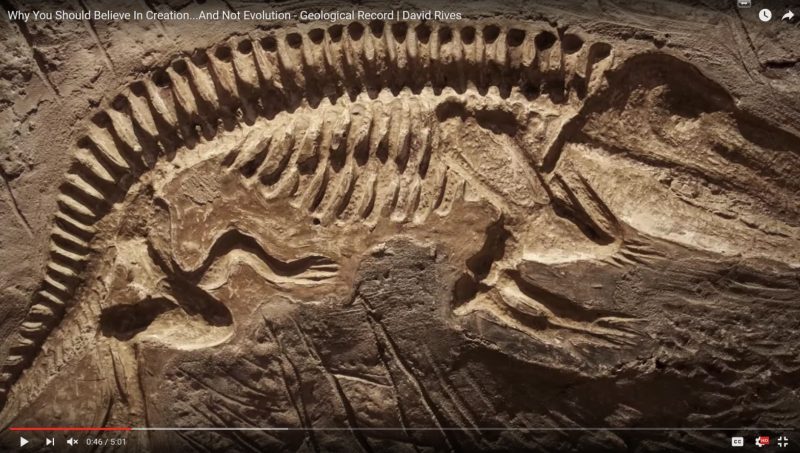 Why should you believe in creation, and not evolution? I mean, scientifically speaking.
Haven’t we proven that Evolution is a fact?

Well, evolution is a VERY broad term, but while most people think of slow changes in the animal world, the theories of evolution also require very specific geological activity and LOTS and LOTS of time. So, let’s look at evolutionary chronology and its implications.

We’ve spent a lot of time at David Rives Ministries focusing specifically on scientific evidences confirming the Great Deluge of Noah’s day, because this catastrophic event is key to understanding much of the Geological and Paleontological world around us. Let me see if I can sum up why there is so much controversy concerning the age of the earth: Because we see river beds eroding at slow rates today, and we see very few animals being preserved as fossils today, evolution interprets this observation from an uniformitarianist’s perspective. This is the idea that the present is the key to the past. In other words, they take current values of erosion and fossilization, and extrapolate back into the past at the same slow rate. This certainly would give the APPEARANCE of an earth that is millions of years old. I mean, on the surface that seems like a pretty fair scientific approach.

However, these calculations are ignoring one EXTREMELY important historical event. SMILE – You know which one I’m talking about! In fact, this event is recorded in hundreds of cultures around the world, and many of the flood legends have very similar themes. But one account gives not just MORE detail – but detail that is typically found in HISTORY books. That’s the one we find in Genesis 6 through 8. As opposed to fairytales and legends, which are usually very generic, lacking in detail, the Biblical account is full of specific detail. The exact dimensions of the ark, the age of Noah when he entered, the number of days it rained, the height of the waters, the time before the floodwaters abated, the month, even the DAY of the month when the flood started! This is a real event being described. And it’s a real event that SERIOUSLY alters uniformitarian dating methods. We’ve seen that small scale catastrophes like earthquakes, volcanic eruptions, and floods can quickly create geologic formations that would have normally taken thousands if not millions of years, based on the slow erosion rates of today. If those small-scale catastrophes can have such profound effect on the geologic record, then imagine the effects of the global Deluge!

The flood upends the entire evolutionary doctrine of eons and long ages, because it would have caused the very effects on the natural world that we see when we use the sciences to observe nature.
What I’m saying is that modern science is pointing to the validity of the global flood.