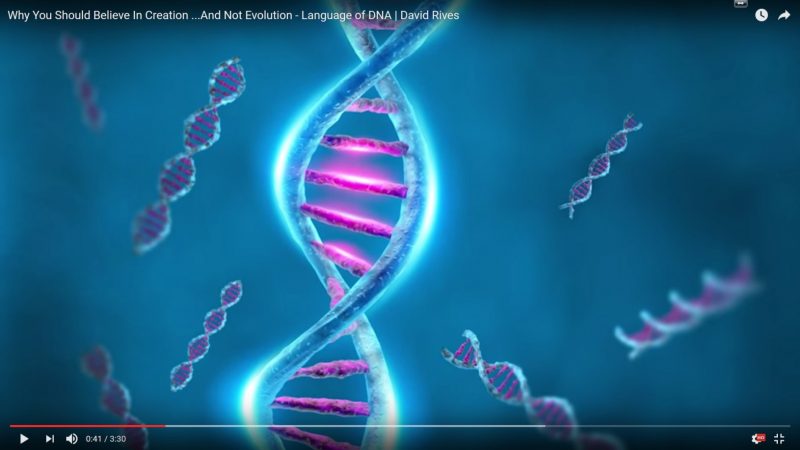 Let’s imagine you’re walking along the beach and you find a smooth white rock with strange figures carved into it. Would you automatically assume that the motion of the waves randomly eroded the figures or would you attribute it to the work of an intelligent human author? Even if we can’t read what it says, we recognize language when we see it and we know language always requires a mind.

Well, DNA—the double helix in the nucleus of every cell in your body—is a language system. It’s composed of just four letters, called nucleotides, which can create twenty different chemicals, known as amino acids. And these amino acids are the building blocks of the 100,000 proteins that the human body needs. Every living thing from frogs, to an iris, to human beings, contains a unique DNA code with the instructions on how to build that organism.

Deoxyribonucleic Acid, or DNA is a highly complex language system –FAR more complex than any computer or human language system. Dr. Werner Gitt calculated that a pinhead full of DNA contains enough information to fill a stack of books stretching from Earth to the Moon—500 times!

Now, language never comes about by chance. Information always comes from already existing information OR…from a mind. So where did the amazing information contained in every strand of DNA come from?

Well, evolution would tell you that it’s the result of chance processes over millions of years. But can random time and chance produce a language system and also know how to read and understand it?

I don’t care how many millions of years you give it! The information in our DNA came from the Mind of the Creator, Yahweh of the Bible. Genesis tells us that, “In the beginning God created…” The complex language of DNA bears the fingerprint of the Creator, not the hallmark of eons of chance.