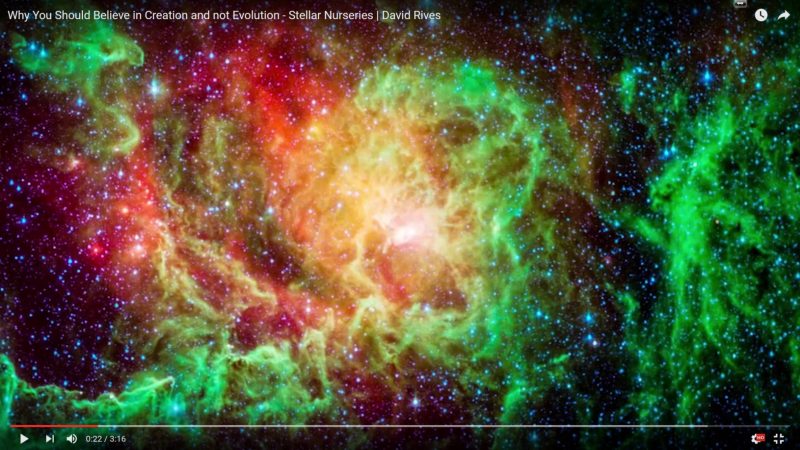 Why should you believe in creation, and not evolution? I mean, scientifically speaking.

Haven’t we proven that Evolution is a fact?

Evolution is a VERY loose term. It could refer to dozens of things, but today, let’s look at stellar nurseries, as stars are born into existence…
You see, the theory goes something like this, although I’m going to try to simplify a little: When a lot of gas in space begins to contract in on itself, eventually that gas balls up, and starts to form a dense, tight ball of gas called a star. This happens trillions upon trillions of times, until you’ve got a nice, populated universe. But we’ve already run into a small problem – no, a BIG problem – because – We’ve never seen a star form!

WHAT? You mean that that entire section of our science book is all just theoretical?

Okay, so I’ve worked with REALLY large telescopes for about 9 years now, and I’ve taken lots of photos of space. Like this. And this. And this. And I’ve even caught a star going supernova! That’s a pretty rare event. But the only examples of supposed star formation you’ll find are when cloudy (or nebulous) areas of space start to clear, and we spot a star for the first time. It’s like driving down the road in a dense fog, and suddenly the fog lifts, and you see a massive mountain ahead. The mountain didn’t magically form in the last 10 minutes; it was just REVEALED when the fog dissipated.

Ha, the evolutionary problem gets a lot worse. It’s a LAW in science – a physical law, that gas in a vacuum expands. That means that gasses are going to always be on the move away from each other. They’ll never compress and form a star. The mutual gravity of the particles in those regions of space just CAN’T bring everything together, so it all slowly dissipates into a larger and larger cloud. Now, proponents of the Big Bang have ONE rescuing device that says maybe under special circumstances, there’s an exception. We’d need a LOT of exceptions to explain how trillions of stars formed in only 14 billion years. You can give it all the time you want, but don’t expect physical laws to change just to salvage your theory. That’s invoking a miracle to make your idea work.

Let me conclude: I think miracles can occur. I’m a Christian. But don’t call that science! These proponents of the Big Bang can teach it as their own mysterious religion if they want, but if you’re following the scientific evidence, let’s stick to the facts and leave stellar evolution out of the picture.

Just one more scientific reason that you shouldn’t believe in cosmic evolution. It takes a LOT of faith.